Toronto Facts – How Neighbourhoods Got Their Name 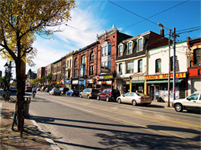 Toronto Facts – How Neighbourhoods Got Their Name

Toronto’s reputation for being a city of neighbourhoods has deep roots. A hundred years ago, many of the city’s best known areas – Parkdale, Leslieville, Rosedale, Yorkville, and others – were independent outlying towns with their own local government and distinctly separate identity.

The patchwork city of Toronto most likely takes its name from the Mohawk word tkaronto, meaning “where there are trees standing in the water.” Originally applied to The Narrows at Lake Simcoe, the name gradually worked its way south to be applied to Fort Toronto and later the city of York. But what about the neighbourhoods – where did those names come from?
Rosedale

How apt that Toronto’s swankiest locale has a pretty name to match the sprawling homes, tree-lined streets and carefully manicured lawns. Interestingly, the flowery name predates the neighbourhood’s reputation for old money. Named by Mary Jarvis, the wife of William Botsford Jarvis, sheriff of the historic Home District and a founder of Yorkville, for the abundance of wild roses that grew nearby, the name “Rosedale” was first applied to the Jarvis’ family estate but later grew to encompass the area north of Bloor and east of Yonge. The “dale” suffix, common to many Toronto neighbourhoods, means broad valley in Old English.

Rosedale was once home to the opulent Chorley Park residence, Ontario’s fourth government house, which was torn down in a moment of utter insanity to create parkland.

Another part of Toronto that began life as an independent village, Leslieville was once home to a substantial community of brick factory and nursery workers. George Leslie, the owner of a large gardening business and major employer east of the city, gave his name to the area now south of the CN tracks, west of Coxwell.

Alexander Muir, the first principal of Leslieville Public School, is famous for penning the poem The Maple Leaf Forever, so the story goes, after a bright maple leaf fell from a nearby tree onto his jacket. The inspirational tree still stands on Memory Lane south of Queen Street East.